From 1948 to circa 1956, Chile had seven callsign areas. District 7 included Antarctica, for which the prefix was CE7Z. All CE7Z callsigns in this period had a two-letter suffix. Club Log maps CE7Z callsigns to Antarctica from 1948-02-18 until 1956-12-31. More information is required to establish the true end date of the use of the CE7Z prefix from Antarctica.

The Chilean Antarctic base Pedro Aguirre Cerda is located on Deception Island, South Shetland Islands. This base opened in February, 1955. CE7ZN was active from this base. Club Log maps CE7ZN by a callsign exception.

The 1957 Summer edition of the International Callbook shows that call areas 8, 9 and 0 had been added: 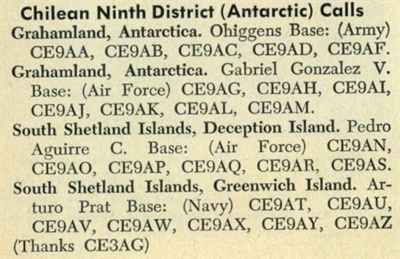 The June, 1972 issue  of CQ Magazine states that all CE9AN-AZ callsigns are in South Shetland Islands

The January, 1990 issue of CQ Magazine states that all CE9AN-BZ callsigns are in South Shetland Islands.

This page may contain information that is the copyright property of a third party. Images or other material displayed on this page is done so for archival and reference purposes, and is not intended to infringe the rights of the owners. Where unattributed content is displayed, owners are invited to send attribution notes to Alan 5B4AHJ or, if they are the exclusive holder of the rights to the content, to ask for the content to be withdrawn from Club Log's archive. All other parties referring to archival content in Club Log are reminded to retain attribution notes and to obtain permission to use the content where appropriate.