After WWII, UK amateurs had to apply for a new licence before being permitted to transmit again. The first of the new licences was not issued until January 1946. Those who held pre-war callsigns received their old callsigns of G2, G3, G4, G5, G6 and G8 plus two letters.Those who held artificial aerial licences received calls  in the series G2 plus three letters, corresponding to their old call numbers with a G prefix. New licences were issued in the series G3 plus three letters (source: "AMATEUR RADIO: THE FIRST 100 YEARS", published by RSGB).

The GD prefix was not allocated to the Isle of Man until circa April/May 1947, the G prefix was used prior to that. 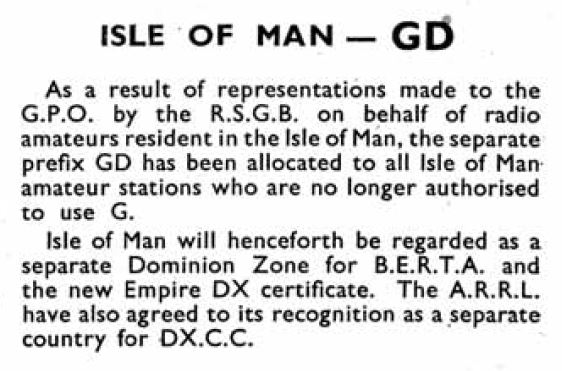