"In June, the ARRL DXCC Desk announced the addition of a Paragraph (c) under Section II, DX List Criteria, 1. Political Entities of the DXCC Rules: "The Entity contains a permanent population, is administered by a local government and is located at least 800 km from its parent. To satisfy the 'permanent population' and 'administered by a local government' criteria of this subsection, an Entity must be listed on either (a) the US Department of State's list of 'Dependencies and Areas of Special Sovereignty' as having a local 'Administrative Center,' or (b) the United Nations' list of 'Non-Self-Governing Territories.'" The new language reclassified American Samoa as a political entity for DXCC purposes. Subsequently, the DX Advisory Committee and the Awards Committee concurred with a request, accompanied by substantiating evidence, and added Swain's Island to the DXCC List as the first "separation entity" from American Samoa. "The distance between American Samoa and Swain's Island has been determined to be in excess of 350 km as required by DXCC Rules Section II, Paragraph 2, Section b)," the DXCC Desk said. Contacts made with Swain's Island on or after 0001 UTC on July 22, 2006, will count for DXCC credit. For more information, including the DXCC Reference Number for Swain's Island, contact the DXCC Desk." 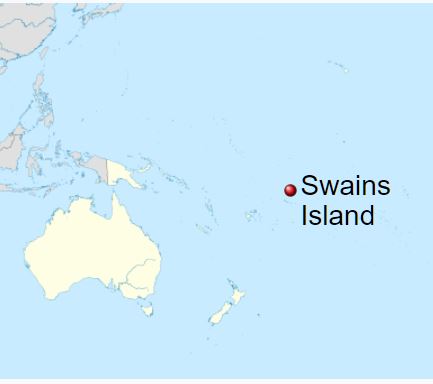 The IOTA reference for Swains Island  is OC-200

Swains Island is a whitelisted DXCC entity The following table lists stations known to have been QRV from Swains Island and which are thought to be good for DXCC credit.The callsigns below are the only ones that Club Log will map to Swains Island. These callsigns have been taken from QSL cards and other sources.Callsigns that are not listed below, or QSOs outside the exception date range, will be not be mapped to Swains Island but will be mapped as INVALID.Please advise any missing valid Swains Island callsigns to Alan, 5B4AHJ, or via the Help Desk.