This article traces the history of Cyprus callsigns since the end of the second World War. It is necessary to log in to Club Log to view some of the QSL cards.

Regarding pre-1940 calls, there were no prefixes until 1927, when Cyprus was allocated the AY prefix (A=Asia,  Y= cYprus).

From information in G2MI's "The Month on the Air" column in  the RSGB Bulletin, it seems that this prefix was used from Q1, 1947.

The August, 1947 issue questions the need for the new MD7 prefix for British Forces personnel, given that Cyprus was administered by Britain, and already had the ZC4 prefix.

The last MD7 operation I know of was by MD7XP in late October, 1950.  The October 1950, iussue of Short Wave Magazine

The following is from the September 1950 issue of the RSGB Bulletin:

Prior to independence in 1960, whilst administered by Britain, stations thoughout Cyprus used the ZC4 prefix.

It is not known when the ZC4 prefix was first used from Cyprus  but it is known that ZC4AL was QRV in 1939.

A 1947-48 Call Book does not have a single entry for Cyprus, but does list ZC4 as the prefix for Cyprus.

The ARRL Postwar Countries List published in the February, 1947 issue of QST lists ZC4 as the prefix for Cyprus.

There were, perhaps, also some local (non-British Forces) stations who were QRV before 1950? <info required>

A snippet from the  RSGB Bulletin, August 1953:

The Republic of Cyprus was formed on 1960-08-16, on becoming independent from Britain. The republic includes the whole of Cyprus, excluding the two British Sovereign Base Areas (SBAs) of Akrotiri and Dhekelia.

The ZC4 prefix continued to be used for Cyprus stations until the 5B4 prefix replaced ZC4 in 1962.

Stations  operating from the SBAs also used the ZC4 prefix. NCDXF's "The DXer" reports that, following independence, "Certain adminstrative functions of the base areas have been delegated to the Republic. These include the issue of driving and wireless licences, and explains why hams in both parts of the island still sign ZC4". The entire article is reproduced at the end of this page.

5B4 callsigns began to be issued from 1962-07-01, and all holders of ZC4 licences switched to 5B4 callsigns on that date, retaining their existing suffices.

<info required> as to the date of issue of the first 5B4xxx callsign, presumably 5B4AAA? This was probably sometime in the 1980s.

ITU has allocated the entire 5B prefix block to Cyprus.

The 5B8 prefix was issued for VHF-only code-free licences starting from 1994-04-08 until <info required>.

Callsigns were of the form 5B8xx, some of which continue to be in use today.

The 1975 JOTA report states that 5B4CSA was the first ever use of a 3 character suffix for a 5B4 callsign.

As was the case for stations in the Republic of Cyprus, all stations in the SBAs switched from ZC4 callsigns to 5B4 callsigns on 1962-07-01, which seems to be something of an anomaly. The answer probably lies in the statement from The DXer, mentioned above, which states that the issue of wireless licences within the SBA had been delegated to the Republic of Cyprus. Whether the issue of 5B callsigns to SBA stations was intentional, or was an administrative error, is not known. Nevertheless, it did happen, as can be seen by viewing the QSLs, by clicking on the callsign links, in the table Early British Forces club stations later in the article.

Stations with 5B4 callsigns operating from the SBAs are not accepted for DXCC for UK Sovereign Base Areas, and counted for Cyprus.

G3PSM, ex ZC4CT/5B4CT, says "The 5B4 prefix came into service on the 1st July 1962 and there were about a dozen of us spaced up 20 metres at the time! You will see from the 5B4PB QSL we worked each other, Famagusta<>Pergamos 30 minutes after the start".

SBA stations switched back to the ZC4 prefix on 1964-09-17, see section on inter-communal ethnic tensions below.
Stations at British military locations outside the SBA also used the ZC4 prefix. ZC4MO (Mount Olympus) is the only known instance of this. Licences were issued by the Joint Signal Committee (Cyprus). RSGB Bulletin, January 1965, reports that there were 12 ZC4 stations active from the SBAs at that time.

G3ZDW comments: "I operated 5B4AK/ZC4AK [RAF Akrotiri club station]  in 1964. During that time I was on the air as 5B4AK and the SNCO in charge of the Akrotiri Club came in and said I was using the wrong call! He said you are to use ZC4AK from now on. So I started a QSO as 5B4AK and signed off as ZC4AK! I must have been on the air the day the call changed from 5B4 to ZC4."!

There was a period of ethnic tension, which commenced in 1963, and which had an impact on amateur radio in Cyprus.

DX News Sheet reported in September, 1964 "All 5B4 stations closed down last Thursday (5B4AHJ:1964-09-17) except those in British Crown Territory; the latter have reverted to the ZC4 prefix". <info required> as to when 5B4 stations became QRV again following this close-down.  See also "The Cyprus Story" later in this article.

G3UCQ, ex 5B4JF, says "In 1964, our licences were revoked because of the troubles and our stations were confiscated, with mine ending up in the Limassol police station. Heathkit DX40 and an AR88D!" John also says that Amateur Radio was still banned when he left the island in February, 1965. Here is the licence revocation letter received by 5B4JF: 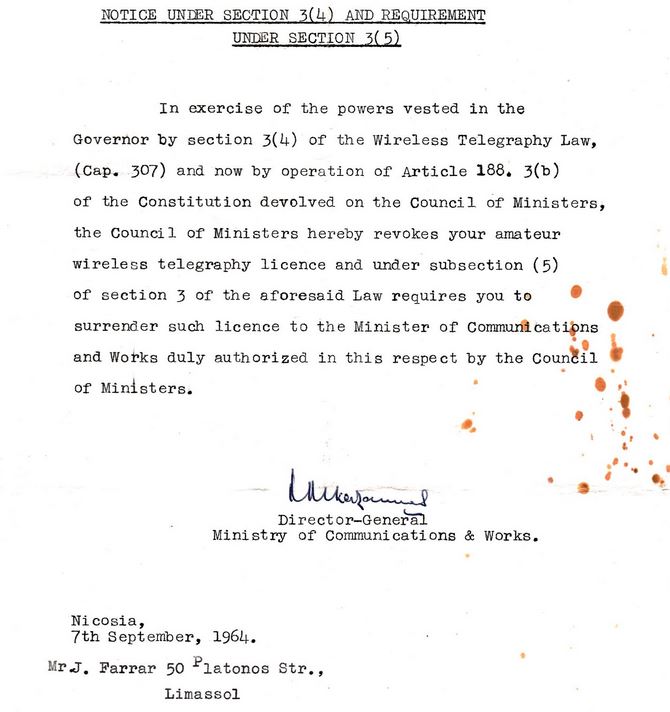 G3SNN, ex ZC4CN, says that amateur radio was banned (in the Republic of Cyprus) during his entire second posting to Cyprus, from March, 1965 to September, 1968. However, as Spyros, 5B4MF also reports, Tony, G3SNN says it was possible to to get a short-term licence for a special event and says "One year, I think it was either '67 or '68, we operated as 5B4SS from Salamis with a special license and were visited by the Telecoms minister. This was set up by members of the Famagusta Radio Club. (we were a front cover photo on a Radcom with me and Jack Hill (G3AUU now silent key) at the rig)." See also the QSLs for  5B4ES and 5B4ES/J.

It seems that amateur radio was banned until June, 1971, but confirmation of this is required.

From DX News Sheet #628, published by Geoff Watts: "C4A - C4Z = calisign block allocation by ITU to the Republic of Cyprus".

A list of JOTA callsigns can be found here

Each  administrative district of the Republic of Cyprus has its own amateur radio Club. Each club is affiliated to the Cyprus Amateur Radio Society.

Other club stations are listed below. Some of these are no longer in existence.

ZC4AK - The Cyprus Situation - see below

The Cyprus Story - see below.

Mercury - The Journal of The Royal Signals Amateur Radio Society

RSGB Bulletin - G2MI's "The Month on The Air"

The following is reproduced from the Northern California DX Club's newsletter The DXer, December, 1960:

The following is reproduced from Mercury, The Journal of The Royal Signals Amateur Radio Society, #11, March, 1965: 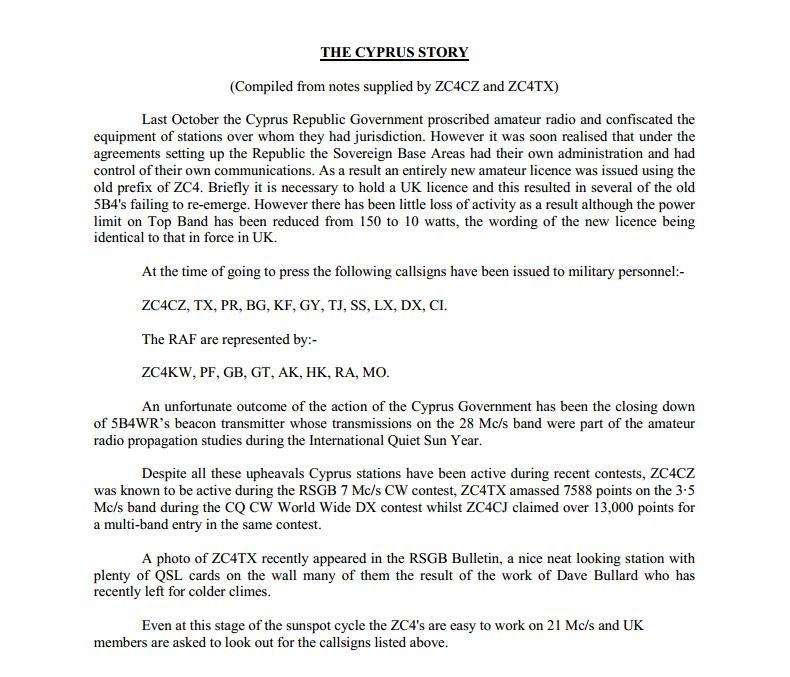 This page may contain information that is the copyright property of a third party. Images or other material displayed on this page is done so for archival and reference purposes, and is not intended to infringe the rights of the owners. Where unattributed content is displayed, owners are invited to send attribution notes to Alan 5B4AHJ or, if they are the exclusive holder of the rights to the content, to ask for the content to be withdrawn from Club Log's archive. All other parties referring to archival content in Club Log are reminded to retain attribution notes and to obtain permission to use the content where appropriate.