Since the adoption of the ARRL Postwar Countries List, the official standard used in connection with the annual DX Competition

and the DX Century Club, several changes have been reported in this department". See page 40 of March, 1949, QST for the

latest revised list. We are pleased to announce the addition of one more country to the list; Macquarie Island, VK1". <snip> 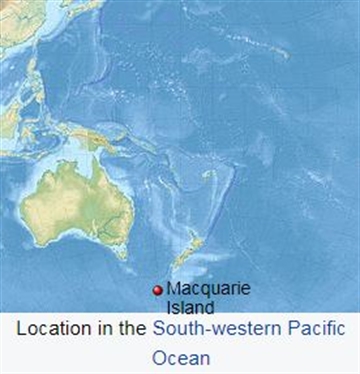 By Uwe Dedering (Own work)

The IOTA reference for Macquarie Island is AN-005.

Macquarie Island  is a whitelisted DXCC entity. The following table lists stations known to have been QRV from Macquarie Island, and which are thought to be good for DXCC credit.

The callsigns below are the only ones that Club Log will map to Macquarie Island. These callsigns have been taken from QSL cards and other sources.

Callsigns that are not listed below, or QSOs outside the exception date range, will be not be mapped to Macquarie Island, but will be mapped as INVALID.

Please advise any missing valid Macquarie Island callsigns to Alan, 5B4AHJ, or via the Help Desk.

ABC News, YouTube - Journey to the Edge of Nowhere